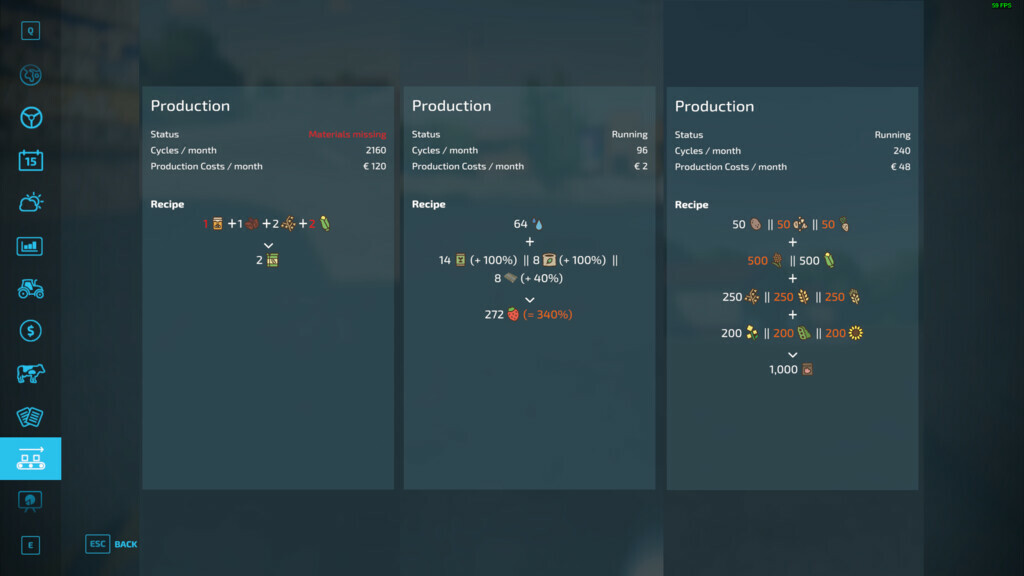 Automatically available for all productions:
* Automatic word wrap on the recipe display for incomming and outgoing products (4 ingredients per line, 2 per line for boosters).
* A colored display of the recipes makes it easier to see why a production is not producing: white – available, red – not available but required, orange – not available and not required.
* Possibility to buy goods in the production menu for a production for double the market price.
* Priority system: Incoming goods can now be set to different priorities via the production menu and will be distributed based on these priorities. The following applies: Priority 1 is most important and will get the goods first until the warehouse is full. Priority 2 only afterwards, etc. Inputs can also be deactivated, in which case they will not receive any deliveries.
* Only active productionlines can be supplied via the distribute mode.
* New output mode available: Sell Directly, Distribute, Storeing (Previously Keep) and Spawning (New). If a production is set to storing, it does not automatically spawn pallets.
* Added manual pallet & bale spawner – All productions with pallet spawner can also spawn pallets & bales manually – via the menu or a trigger.
* Production delivery costs are now reported separately (previously part of production costs).
* Productions that are mission objectives can accept unlimited goods from missions until the mission is completed. Mission goods no longer end up in the production itself during missions.
* Display of maximum storage capacities.
* Alphabetical sorting of the productions.
* In the case of productions, it is displayed whether they are running in parallel (II) or distributed (Y).

Must be actively added to the productions:

Recipes:
* Recipes can be created with several equal ingredients in groups (maximum 5).
* Multiple production lines that previously had to be created separately can be combined into one production line.
* Ability to add one or more optional boosters that increase Outgoing Production.
* Boosters can be disabled or reversed for individual goods.
* Display of the real current production depending on the booster. The current booster value is shown in orange brackets after the amount.
* Ability to create recipes via FillTypeCategories.

Depiction:
* Possibility to add displays on productions that can show the current level in the storage. Also possible with pure storages.
* Possibility to display objects depending on the fill level, e.g. pallets in a production warehouse. Also possible with pure storages.
* Storages can also be provided with a spawn script that can be used to spawn bales and pallets.

Other features:
* New FillTypes can be entered via Revamp at existing sales points without actively changing the existing sales points. A separate point of sale is no longer required.
* Hidden productions with autostart function.
* Various setting options for the above functions.
* All fully multiplayer compatible.

A full list of options, installation help and support is available from the Documentation
This is just the script, the script alone does not change any production recipes. These must be created separately.